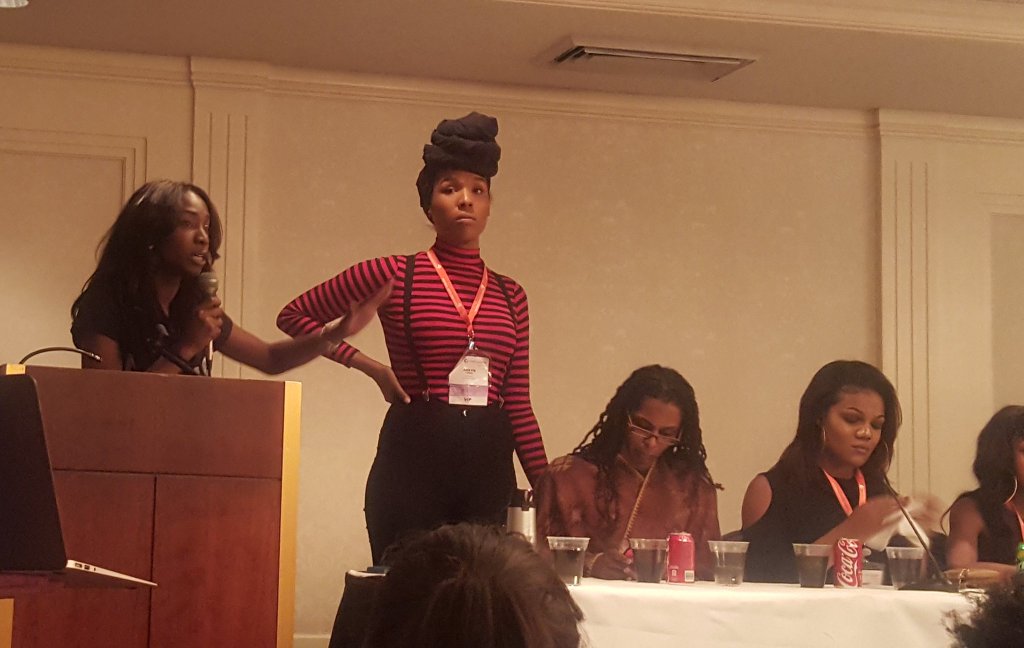 What do you do when a trans woman of color speaks up?  The answer seems so simple, “you listen” right?  Well many of us in the room had no clue what  was going on and who to listen to.  What you will see in the videos below is a conflict at the intersections of age, identity, and orientation.

NOTE:  I support the leadership development of trans women of color and in the moments captured on video below, I became what I felt was needed most in the moment, a conscious witness.  I was not aware beforehand that the protest was going to happen.  I was asked by Tona Brown and the organizers of the Trans Attracted Panel to live stream the discussion.  After the panel was shut down, I asked the young women if they wanted me to continue recording and they said yes.  Afterwards I had private conversations with many of the women in protest and I applauded their courage in speaking their truth, but I also provided feedback on how their actions became could’ve been better received and more effective.

The Trans Attracted Panel at Creating Change in Chicago was protested by a group of young black trans women, one of whom made allegations of abuse against Troy Kennedy who was scheduled to speak on the panel.

The trans women in the video bring up some very strong points, but the delivery left a very strong impression on many who felt blindsided by unskilled activists.  Why did these women not come to any of the many trans women who are considered to be leaders in our community and who were present in the room?  As one of the women on the panel explained, “there’s no trust.”

Part 1 covers the introduction where you will get a sense of what was the original intention behind hosting this conversation to begin with.  You will hear a sincerity in the voices of the organizers in wanting to provide a space for healing, and for what some considered to be a long overdue conversation.

Part 3 The protest continues as the audience chants, “Hell No!  Troy gotta go!”  After some struggle, the original organizers give the floor to the new panel made of up trans women of color who asks everyone to take a seat so that they could explain the reasons behind the protest.

Part 2 starts from when the protest begins which is at the very moment Troy is about to speak and shows a confrontation between protesters and the original organizers of the panel begins.  Other LGBTQ people in the audience also express their frustration or outright disagreement with the protesters claims and their chosen action.

Part 1 Arguments and more protest break out before the panel begins.  Feeling confused and emotional, I went up to the podium to get everyone to sit in their seats, and show solidarity to the trans women of color on the panel in that moment by helping to prepare the space for the conversation that was about to take place.  This video covers most of the panel.  The final video(s) will be uploaded soon.