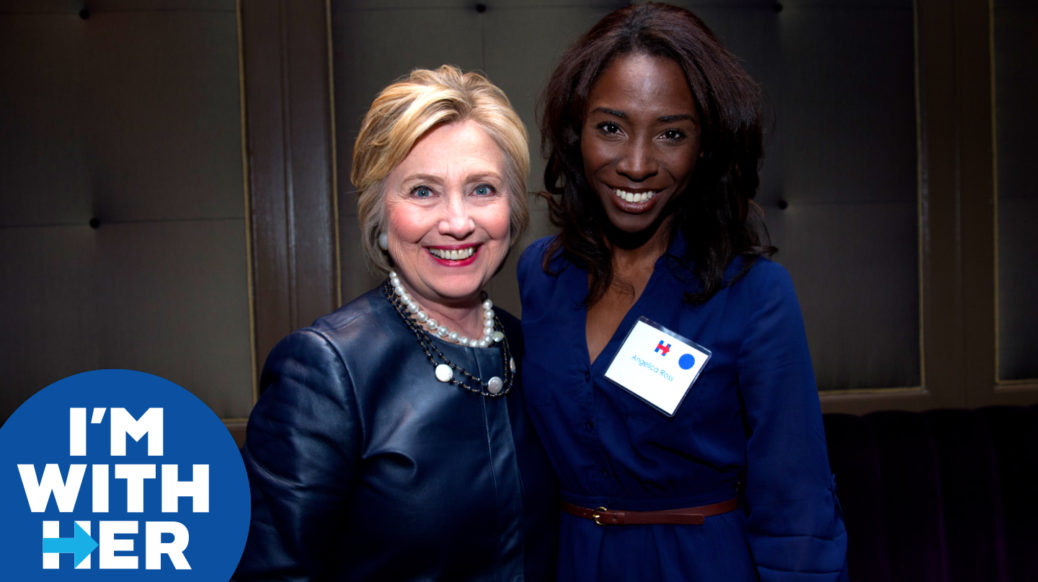 I’ll be honest, I was on the fence.  Back in November of 2015, while attending Janet Mock’s wedding, journalist and new friend Alicia Menendez then asked me, why I wasn’t completely sold on Hillary.  As I gave my answers I started hearing myself, and I sounded exactly like the same people who either ignored or didn’t support my leadership efforts, people who have spoken against me, or outright worked against me, spreading half truths, and full out lies.

“I don’t trust her” I said.  “She seems very groomed for the people and not grounded in the people.” That was my general thought.  She seems to know just what to say to the people, but is also clearly in partnership with corporations, and benefits from capitalism.  Surprisingly in answer to many of my questions I could say, “so do I.”

I recognized that Hillary and I share a desire to be innovative at the intersections of capitalism and social justice, but we both have been met with ceaseless criticism from all directions.  When you’re ready, willing, able, and qualified to take the lead and you are anyone other than a white man, a constant questioning of your qualifications and intentions awaits you.  I’ve been accused of “respectability politics” and being too polished looking as well as being criticized for not being polished enough.  I’ve been called both a cocky know-it-all, and also told I know nothing.  I then thought about the kind of resolve I have developed around the challenging circumstances in front of me, I thought about the level of diplomacy I’ve developed over years of dealing with difficult people, the poise to deal with incompetence, and the compassion to see through people’s pain and fears that limit their own ability to move forward with the rest of us.  With Hillary as our next President, we can move forward and continue the progress made by President Barack Obama.

Recently BuzzFeed reported “Until Friday’s event, Clinton, often introduced by a familiar staple of elected officials, had never prominently featured a transgender person at a campaign event.”  The article then went on to report that Teresa Sparks, a white trans advocate, as the first transgender person to do so.  Cherno Biko called Buzzfeed out on Twitter.

Buzzfeed soon after added a correction changing one phrase from “campaign event” to “campaign rally” and then sent out a tweet stating that what they meant to say was that Sparks was the first to introduce Clinton at a campaign rally.  This is what erasure looks like.

As we read headlines describing Hillary’s win as Breaking the ultimate glass ceiling I want to remind us that as a human race, we have yet to recognize the heights to which we can soar.  Although this is a great achievement in American history, Hillary, myself, and many others recognize that we’re not done shattering ceilings and breaking down barriers.  So let’s get to work.  #ImWithHer